As we calculated, our first chick arrived today; right on time. When we got up this morning, around 6, there was a circle cracked in the egg. After watching it for a while, we heard the first “cheep”- I was so excited!! The kids spent the morning fighting for position looking into the window hoping the chicken would “hurry up” and hatch already.

I had an appointment so we had to leave for a couple hours mid day. When we got home around 3, the chicken was waiting for us. 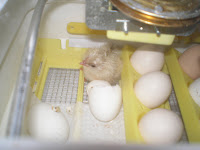 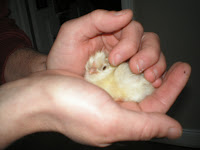 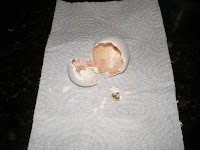 This is all that was left of the egg after the chicken worked it’s way out. I guess it eats the yoke? I was disappointed that we missed the whole thing; but as my daughter pointed out- we have another one due to hatch tomorrow. 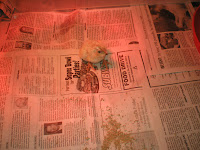 We set up the coop in the basement again. All of us were sitting around watching it try to figure out how to use its new legs. This is so cool- much better than getting them thru the mail.