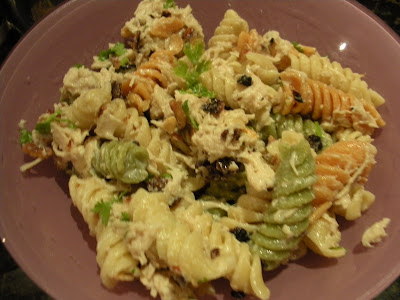 one 8oz box short pasta
2 1/2 cups cooked shredded chicken
1 cup low fat plain yogurt
1/3 cup reduced fat mayo
1/2 cup raisins
1/2 cup coarsely chopped parsley and cilantro
2 tbsp toasted almonds, coarsely chopped
1. I used the split breast chicken I had gotten on sale last week, so I boiled the chicken in enough water to cover it until the meat was tender and falling off the bones.
2. In another pot, cook the pasta until al dente in boiling, salted water. Drain pasta, then rinse under cold water. (Try to remember to reserve 1/4 cup of the pasta water- I didn’t and never do!)
3. In a large bowl, stir together pasta, chicken, yogurt, mayo, raisins, parsley, cilantro, and almonds. (in the recipe was 2 tbsp lemon juice & 1 tsp lemon zest which I forgot- probably would have been a good addition). Thin sauce with pasta water if needed (I didn’t). Season with salt and pepper if necessary.
results- none of the kids liked it- at all. In fact I had to feed them the rest of the chicken I was going to make into salad for their dinner. At first I made it with just the yogurt, I wasn’t crazy about the tang of it. Then I mixed in the mayo and it was much better. I didn’t have enough parsley, so that is why I added in the cilantro. I dry roasted some flavored almonds I had in the fridge- delish! I love toasted almonds, they gave a nice crunch and the raisins added a little sweet in some bites. I can’t wait to have it for lunch today to see how the flavors have blended.
I won’t bother totaling the cost since I was the only one to eat it- but it was cheap!!
I am going to try to enter this in Presto Pasta Nights since I have not participated in that in a while. This week it is hosted by Helen of Fuss Free Flavours.