I am so excited that I finally got got some canning accomplished. I bought peaches from Young’s Farm earlier in the week. Carla sells the ones that are a little banged up for 99 cents a pound. With a little trimming, they are as good as new.

I tried to take some pictures along the way, but again, they are not very good. I really need to work on that.

1. Put enough water into your canning pot to cover the jars by at least an inch. Set that to boil. Wash jars if necessary. When the water starts boiling, put the jars into the water to sterilize them and make them hot.

2. Since my peaches had some bad spots, I cut those out first. Then I blanched them for about a minute in boiling water. (at this point I was supposed to put them into a ice bath, but I forgot that part). Then the skin will peel right off. Then cut into thick slices, or halves which ever you prefer. 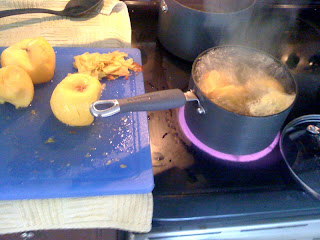 3. Treat for color. Since I didn’t have any of the commercial ascorbic acid powder, I used a lemon juice & water mix. I couldn’t remember the part ratio, so I looked it up again- this site says one to one. (That is not what I did). Let it soak for 10 minutes then remove with a slotted spoon. 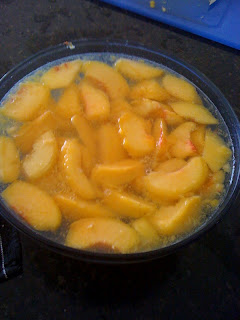 4. Make syrup. I like the extra light, and I made it with even a little less sugar than it called for. It said 5 1/2 cups of water to 1 1/4 cup sugar, I just used one cup. Heat until boiling, then keep warm until you are ready to use.

5. I used the raw pack method- So I spooned the peaches from the lemon juice treatment into the jars. Pack in tight without damaging the peaches, leaving 1/2 inch head space. Ladle hot syrup over peaches, leaving 1/2 inch head space. Remove air bubbles. Adjust 2 piece caps. (The lid should be in a pan of hot, but not boiling, water to soften the seal. Process pints for 25 minutes and quarts for 30 minutes. 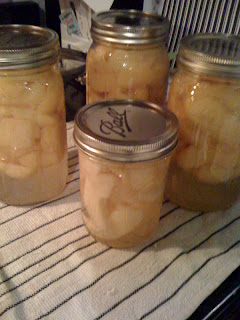 6. The jars should sit over night, moving them too much while hot could cause them to shatter. Bad, very bad! After they are cooled, remove the band and pull up on the lid, it should be securely sealed. It also should have collapsed, not allowing any movement of the lid when you push in the middle of it. If the jar didn’t seal, just put it into the fridge and consume in the near future.

So, that’s it. I know it sounds confusing, but once you have done it a time or two, you get the hang of it. And what could be better than opening a jar of fresh summer fruit in the middle of the winter?