Skip to content
WARNING- this post won’t be for everyone!! This is one of the craziest things I have ever done. And for me, it has brought my food ideas full circle. When I was growing up my parents had a huge garden (they still do) and we grew just about all of our own vegetables. My dad fished and we also had fresh fish a lot. So I always knew where a significant part of my food came from. But when I went to college and took anatomy, after dissecting various animals, there were many years I could not eat meat on the bone. It was a bit too real. Well, guess what, ain’t nothin’ more real than this: 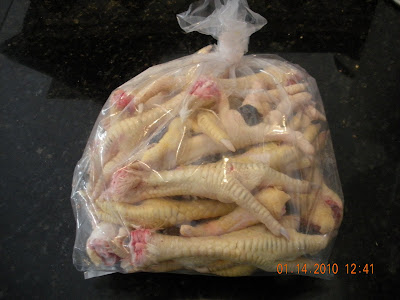 When our friends processed their chickens, my hubby brought home all the innards. They are bagged and frozen. Come to find out people like to eat these, so I didn’t feel the need to use them up right away. We joked then about how he thought about bringing home the feet but didn’t. Shortly after that (isn’t it funny how that happens) I received the Nourished Kitchen’s email update which contained her recipe for Voodoo Stock. Full of glucosamine chondroitin, collagen, calcium and trace minerals; I felt like I had missed out on a use able part of the chicken.
So, when we processed our own birds recently, I had Adam bring home the feet. 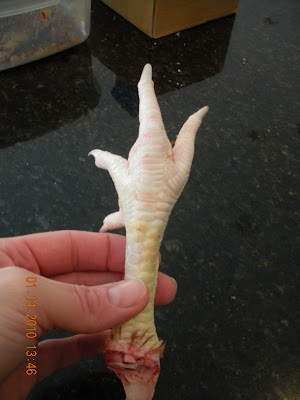 I have to say the feet were totally disgusting. They smelled terrible! 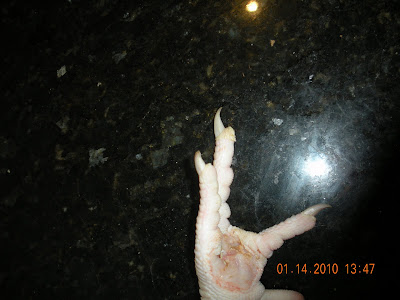 The worst part is the claws- look at those nails!! 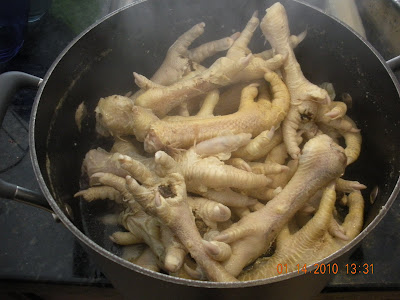 The first step is getting rid of those claws and the yellow membrane. I blanched them for a couple minutes then let them cool. This part was very difficult. I was expecting the skin to fall right off like a tomato- not so much. I almost gave up a couple times, but what I ended up doing was leaving a significant part of the skin on. I did cut off all the claws, and all the blackend area on the balls of the feet. 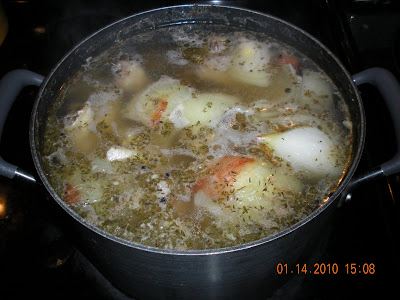 Then they all went into the pot with some carrots, onions and thyme. Thankfully the smell turned to a nice soup smell since it was almost time for the kids to come home and this was going to be a difficult at best sell on getting them to eat this! 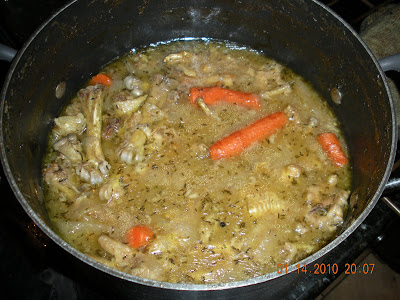 After many hours (4 I think) of simmering- here is what we have. 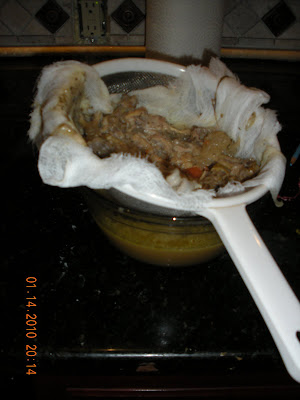 Strained it through two layers of cheese cloth and the fine mesh strainer. 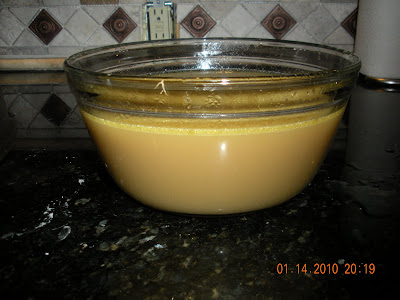 This is the end result. It is beautiful stock. But, I’m not so sure if all the effort was worth it. The kids did try it the first night, no one ate too much. But after it cooled it was solid and there was no one (but me) that would go near it. It also didn’t make a lot of stock. I ended up boiling the bones from a chicken and using both stocks for soup. The only thing that would bring be back there would be the health benefits like the glucosamine.
I just figured I would throw in a picture of our first home grown chicken: 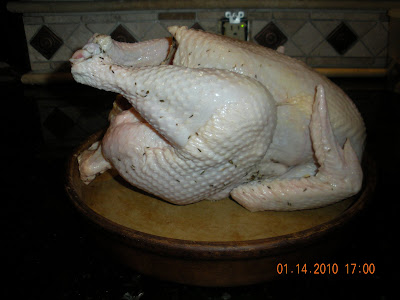 It was delish! That was a cornish cross bird, about 5 lbs dressed. We ended up getting most of the birds about 3-5 lbs after much longer than the 8 weeks we had expected it to take. We ordered the chicks much to late in the fall and that had a big part in their slow growth, we think.
So, we have changed breeds and just received a shipment of 100 (to split with friends) red-bros or freedom rangers. These will go outside and forage like “real” chickens. The cornish cross does nothing but sit and eat. A good breed for a chicken factory but not for a farm. So, we’ll see how this works out. 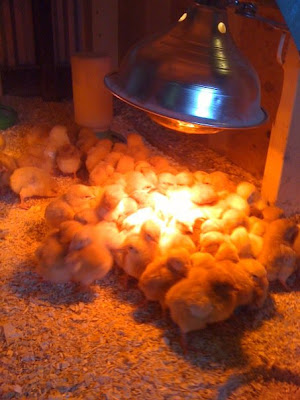